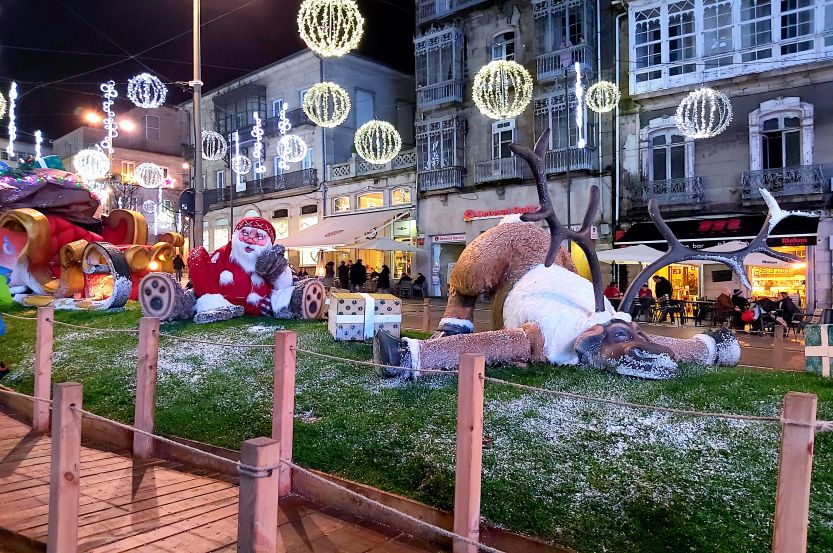 One of the habits cultivated by the Spaniards is the preparation of a small Christmas Nativity Scene (Portal de Belén) at the beginning of December, which is usually represented by figurines of the Holy Family and a manger with the Baby Jesus. It can be a fun, family initiative that allows everyone to show off their creativity. Large nativity scenes appear on the main market squares of Spanish cities and villages, where of course competitions for the prettiest of them are held. They are also found in almost every Spanish home. Spaniards love to buy new figurines for them, and modern created cribs can look very original and significantly differ from the traditional ones. In Catalonia and in some of the neighboring autonomous communities of Spain, one of the elements of the nativity scene is a figurine that evokes more laughter than controversies. It’s a character sitting on the toilet or revealing his buttocks, which they call a caganer. The traditional caganer depicts a Catalan peasant in a red cap, his more modern incarnations are usually politicians. This is supposedly a Christmas symbol of happiness and prosperity. 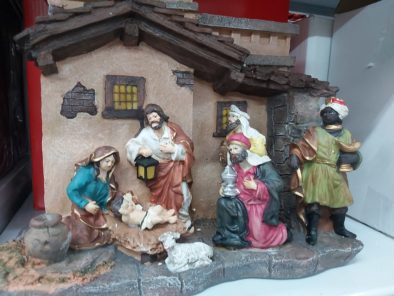 Everyone who lives in Spain plays the lottery at Christmas, often buying one-tenth of the ticket and playing the same numbers as their group of friends or colleagues. This special festive lottery is called “El Gordo” and had its beginning already in 1812. The coupon costs 200 euros, and contains 10 five-digit numbers, but you can only buy one “five” for 20 euros. If the winning coupon contains exactly this number, its holder receives 10% of the prize. The prize pool and the amount of money you can win are very high, that’s why in every home you buy a ticket with the hope of winning. Lucky numbers are drawn on December 22 in two machines by children from the school of San Ildefonso, who then sing them. The lottery is broadcast by television throughout the country. And this is a lottery ticket: 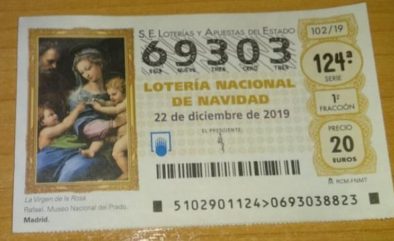 La Nochebuena, so Christmas Eve, starts from a festive dinner with the family. The menu on this day is very extensive and varied, and the Spaniards are not limited to a specific number of dishes. Depending on the region, there are slightly different dishes on the table. Therefore, nobody should be surprised by e.g. seafood served especially on the coasts. Poultry, pork or lamb are common, but also fish and rabbit dishes. The Spanish Christmas Eve dinner consists of starters, main dishes and of course desserts. Jamón, a popular type of Spanish ham, is one of the most popular Christmas Eve starters. At the beginning of the supper you can eat cold seafood or pate. At this time, the consommé soup is also served, which can be considered a Spanish version of broth. In Madrid, you can eat almond soup. Among the main dishes you can freely choose, everyone will find something for themselves. A popular dish is cochinillo de Navidad – roasted piglet, served mainly in Castile-La Mancha. In Catalonia, on the other hand, different types of meat​, sausages and black pudding are served. Being in Andalusia, there is a high probability that during Christmas you will eat good chicken, because it is poultry that dominates in this region. On the coasts, seafood and fish are popular: lobsters, shrimps, sea bream and cod appear on the table, but there are also snails. In the Canary Islands you can eat goat meat. As you can see, regional Spanish delicacies are radically different! The Spanish Christmas Eve table certainly cannot miss sweetness. Among the most frequently served delicacies must be turrón – a type of nougat, which is prepared with the addition of almonds, honey and hazelnuts. Turrón occurs in both hard (turrón de Alicante) and soft (turrón de Jijona) versions, and is the equivalent of a wafer shared by loved ones during Christmas Eve in some countries. Polvorónes, or Andalusian Christmas cakes are also very popular. They are made with the addition of cinnamon and almonds, dusted with powdered sugar and sold wrapped in paper. On Christmas Eve you can also taste: marzipan, nuts, dates and several types of yeast cakes and pastries. What is more, Christmas Eve in Spain, of course among adults, is accompanied by alcoholic drinks. The most popular is anise (anís), although good wines land on the tables then, and sometimes you hear a pop of cork from the Spanish equivalent of champagne (cava) at home.

Here is the photo of famous turrón de Alicante: 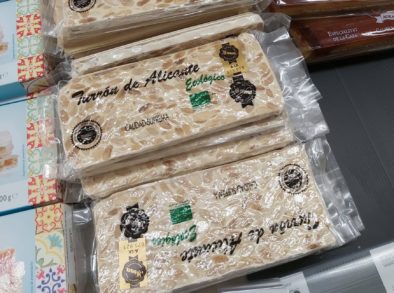 In Spain, on December 24, at midnight, the Misa del Gallo – Mass of the Rooster, which was to sing at the night of Jesus’ birth, begins in churches. All Spanish customs related to Christmas come from the fact that Spain is a traditionally Catholic country and it is common practice to go to church on Christmas Eve after dinner to attend this mass at 00.00 to confirm your faith and praise the birth of Jesus Christ on Christmas day. On the same day, in many homes, in the evening, entire families sit in front of TV to listen to the annual Christmas speech of the King of Spain.

Many cultures combine the tradition of a day devoted to pranks and jokes. Although we’re used to the April Fool’s Day taking place on 1st of April, Spain is different and they do so on December 28. On this day they celebrate Día de los Santos Inocentes, known as the Holy Innocents Day. The name of this holiday comes from the biblical Slaughter of the Innocents at the behest of King Herod, who at the time of Jesus ordered the murder of all boys under the age of two. Why an innocent? Because the children were too innocent to commit any sins. On this day, the media give the wrong information to deliberately mislead the public. Take care if you are in Spain on this day, because they can make fun of you at any time.

La Nochevieja (literally translated Old Night) celebrations in Spain are very similar to typical New Year’s Eve. People party with their families and friends, drink champagne and watch fireworks. However, the celebration is accompanied by completely different traditions and superstitions: the most important of them is eating 12 grapes with each subsequent clock strike. When the clock on the Casa de Correos tower on Puerta del Sol in Madrid begins to strike midnight, you have to start eating twelve grapes in turn, along with twelve clock beats. Tradition or legend comes from the time when the former king of Spain after a very abundant grape harvest, decided to give each Spaniard a bunch of grapes for New Year’s Eve. It is most celebrated in Madrid, at mentioned before Puerta del Sol, the central square in the city. Here on New Year’s Eve thousands of people gather to have fun, listen to music and celebrate the coming New Year together. This is a centuries-old tradition in Spain. A huge number of Spaniards watch this event on TV and as we are a very family nation, it often happens that even young people do not go with their peers on New Year’s Eve until 12 o’clock. Practically every city in Spain has its fiesta and street party, celebrated loud and riotously, when people have a drink of cava (Spanish sparkling wine) or champagne.

Three Kings instead of Santa

Traditionally, the Spaniards have never celebrated Christmas in December. Instead, gifts are delivered to children on January 6 by Reyes Magos, so the Three Wise Men. However, this is currently changing and they receive Christmas presents both on Christmas and on January 6, the Epiphany. But Christmas presents, which Spanish children (as well as adults) can find under the Christmas tree on December 25, are just a foretaste of what awaits them on the morning of 6th of January. Earlier, the youngest have to write a letter to the biblical Three Kings with a list of gifts they would like to receive. They must justify this by listing their good deeds done throughout the year. January 5 is the day when a big fiesta takes place in small and large cities in Spain, the so-called Cabalgata de Reyes Magos. The Procession of the Three Kings moves through the streets and the figures of the Three Wise Men (known from the New Testament: Caspar, Melchior and Balthazar) travel on horseback, on camels, tractor or truck trailers, and sometimes are transported in an even more original way (e.g. by helicopter to the town of Logroño). Along the way, they throw sweets and small gifts to a crowd of enthusiastic children. On the evening of January 5, Spanish children put their shoes on the front door or balcony. Next to them, they often put sweets (to encourage the Three Kings to visit their home) and a bowl of water and hay (as a meal for tired camels). In the morning the following day, they find the gifts in their shoes. A warning that is to motivate the youngest to behave better is a gift in the form of sweets resembling the appearance of a lump of coal, i.e. carbón de Reyes. What is worth mentioning is that depending on the region of Spain, gifts can also be given by other characters. For example – in the Basque Country it is the miner El Olentzero, in Catalonia – Caga Tió, and in Galicia – El Apalpador.

A tradition associated with the celebration of the Epiphany in Spain is breakfast in a family circle. The household members sit down together to share a purchased (less often hand-made) yeast cake called Roscón de Reyes. It is ring-shaped, decorated with candied fruit, sometimes filled with whipped cream. Inside, there is a figurine commonly called sorpresa (Spanish surprise) and a bean seed. Having the first in your piece of cake means the privilege of being a holiday king and wearing a paper crown on that day. If someone happens to have a bean, they will have to buy next year’s Roscón de Reyes.