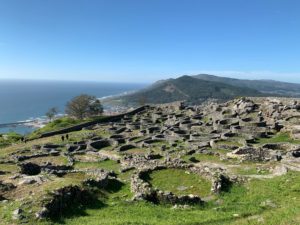 The first time I have been to Spain was in 2019. I was an Erasmus+ student at Universidade de Vigo at the Faculty of Filoloxía e Traducción. Coming from the East side of Europe (I am a Hungarian-Romanian double citizen) Spain was a place I only knew from books and mostly from movies and from music videos. Naïve me believed in all the crazy stereotypes the pop culture showed me. Before coming to Spain I thought that here everyone is a flamenco-dancing, tequila-drinking crazy muchacha who likes to loudly argue on the yellowish streets as the sun is going down. I couldn’t be any more wrong. I pretty soon realised, that Spain is so much more than what movie directors show in Hollywood blockbusters. To start off with, Spain is very big and many different cultures live within the same country’s borderlines. I was lucky enough to travel around and saw lots of different places and it is safe to say, Galicia is very different from Cataluña, and Cataluña is very different from the area of Madrid or from the province of León. Of course people living in different parts of Spain share the same basic cultural elements, but each and every province has their own to add to the whole and they are all very proud to their heritage.

Since Spain is a huge country, as I mentioned before, the weather and the climatic characteristics can differ from province to province. Lately we all heard from the news that there was a huge snow storm in Madrid which is very unusual, but apart from that while the winter-sport enthusiasts can enjoy skiing at the mountains the people who prefer warmer temperature can choose to have a nice walk by the beach in the South of Spain at the very same time. The travellers who choose Spain as their travel-destination are also lucky because it is quite easy to travel around within the same country. There are several small airports at every part of the country making it easier to get from one city to another but also there is a fair amount of buses, trains and even ships ready to take you anywhere you wish to go. Coming to Spain was a life-changing experience for me. I have seen things like never before and I have found friends for a lifetime. I remember those Erasmus months as the best time of my life. Spain is waiting for YOU. What are YOU waiting for?